Terri Scholting: Living Life to the Fullest in Louisville 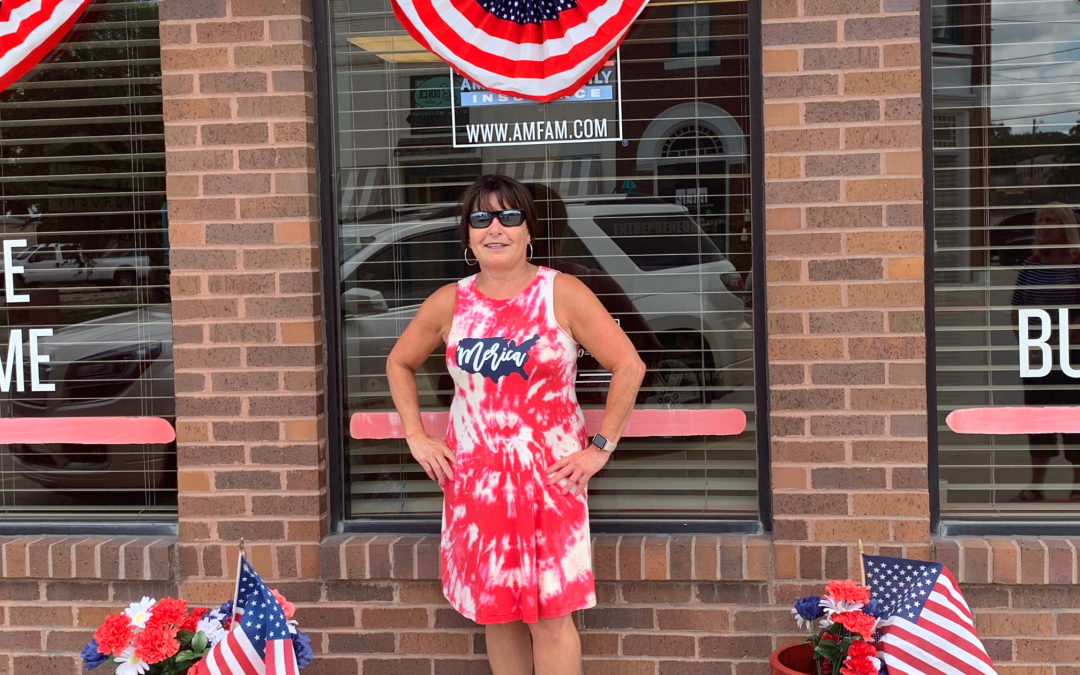 From running an in-home beauty salon to selling insurance on Louisville’s Main Street; Terri Scholting has led a life she never planned on but could only have dreamt of.

Terri, originally from Papillion, met her husband while they were teenagers, and the high school sweethearts married in 1974. For 48 years of marriage, the couple has been blazing a trail in business and in the local community.

“We both have that entrepreneurial spirit and it works well for us. We feel blessed that we are self-employed and love what we do. We can’t imagine not being happy going to work every day”

Terri opened her American Family Insurance doors on August 1, 1993, in the heart of Louisville’s Main Street. After years of growing her business in that little shop, she then purchased the building next door, renovated the space, and moved in 20 years to her first day in business. And Greg has owned his trucking business since 1998.

“It’s been 29 years and it seems like it was just yesterday and I still love it.” Terri tenderly shared.

But insurance was a passion Terri never knew she had. And Louisville was a place she didn’t anticipate calling home.

In 1979, Greg’s grandmother passed and the young family purchased her home and became homeowners for the first time. The transition to Louisville and small-town living was smooth because her parents had a place in Cedar Creek, and she grew up spending summers there with families from Louisville. So their move was met with familiar faces.

“It was the best move we could have ever made for our family.”

Their son was just 3 years old and Terri was in stay-at-home mom mode. And while she loved every moment spent with him, Terri was wanting another venture outside of her “mom” title. Terri had always dreamed of becoming a hairdresser, so with the support of her husband, she got her license and they built a little beauty shop in their tiny 800-square-foot house on Cherry Street.

Greg and Terri then had their daughter in 1983 and with two young kids, they were quickly outgrowing their home. So the Scholtings bought a piece of land outside Louisville and built their home.

Terri Scholting has led a life she never planned on but could only have dreamt of.

Upon getting settled in their new house and adjusting to life as a family of four, Terri put a pause on doing hair to focus on raising her family and supporting their activities. Fast forward four years with both kids in school all day, Terri was ready to make some career moves.

She took a part-time job with an insurance agency in Omaha for a State Farm agent. She began working three days a week and fell in love with the business. She took ahold of every piece of information she could and was eager to learn the business, inside and out.

“I never thought I would be doing insurance but everything fell into place and it was meant to be.”

She then transitioned into working full time and wanted to become an agent herself. An opening at State Farm presented itself but it required a college degree, and at that point, going back to school wasn’t in the cards.

But then her husband saw an opening in the paper for American Family Insurane and the rest is history. She applied, met with the hiring team, and they offered her the position of Agent right there on the spot. They asked her if she would be interested in opening the first-ever American Family office in Louisville. The answer was an immediate yes and she knew of the perfect place to open up shop.

Opening On Main Street in Louisville

And on August 1st, 1993, her agency opened its doors on Main Street.

As her husband Greg says, she opened the doors and all she had was a desk and telephone. And Terri hit the ground running to build that business. From dusk to dawn for over eight years, she never saw daylight. Terri was the state growth leader during her first two years in business, which was a testament to her perseverance and determination as a business owner.

“It was a fairytale come true. I never planned or thought insurance would be my niche, my calling, but it is and I still love it to this day.”

To this day she still remembers receiving the call for the part-time job and how excited and energized she felt. Terri thanks local barber, Dennis Barnes, for leading her to that job. He’s been a barber in Louisville for more than fifty years and knew she was looking for work, and he knew the agent who did a lot of business in town. Because of that referral, her successful career in insurance began.

Terri is a life-long learner, so it’s no surprise to those who know her that she still had a little something up her business suit sleeve.

Years ago she developed an interest in real estate. So she bought a book and did self-study at night. She was always intrigued by the industry but was hesitant to start. One night she was having dinner with a friend who was going to her first class the following week at Randall School of Real Estate. She debated, and after discussing it with her husband, Greg urged her to join her friend and attend the class.

Terri earned her real estate license in May 2017 and it was a natural fit with insurance. Many of her clients express interest in selling their homes, as well as needing coverage for new homes, and specific home insurance needs like flood insurance. It all works hand in hand.

And with her real estate license, Terri is able to provide her clients with a span of services and expertise.

Terri hangs her sign at Nebraska Realty and couldn’t be happier.

“They immediately felt like family and welcomed me with open arms. Andy Alloway, President of Nebraska Realty, was so kind and friendly and I didn’t need or want to look anywhere else.” Terri’s dear friend, Candy, was her mentor and showed her the ropes.

Terri understands how important it was for her to receive support from seasoned business owners as she was beginning her career, and that is something she is always happy to pass on and give back. Her biggest piece of advice to new business owners is to build and nurture professional relationships for not just referrals, but for support and mentorship.

“I owe a lot to them.” (Terri Scholting referring to Nebraska Realty)

And she gives back with her time and devotion to BUILD (Businesses United in Louisville Development). Terri has been a long-standing member of BUILD and has been President of the organization since 2006.

The group gathers on the first Tuesday of every month and focuses on bettering one another’s businesses, Main Street, and the community as a whole. BUILD is the longest-running business organization that has ever been formed in Louisville and its members are very proud of its history and commitment.

The Louisville business community is like a family and truly wants each other to succeed. Terri encourages new businesses to become involved with BUILD and take advantage of every learning opportunity.

“There are so many people who are willing to help. Just take the time to give them a call and they’ll take you under their wing and support you.”

A Zeal For Life

When Terri finds free time outside of her booming insurance business and real estate career, she dedicates herself to a healthy lifestyle and has a passion for fitness exercise. Staying active and being outdoors is a pillar in the Scholting family. Terri and Greg, along with their children Trevor and Lexi, and their families enjoy lake and river life when the weather and their busy schedules allow. 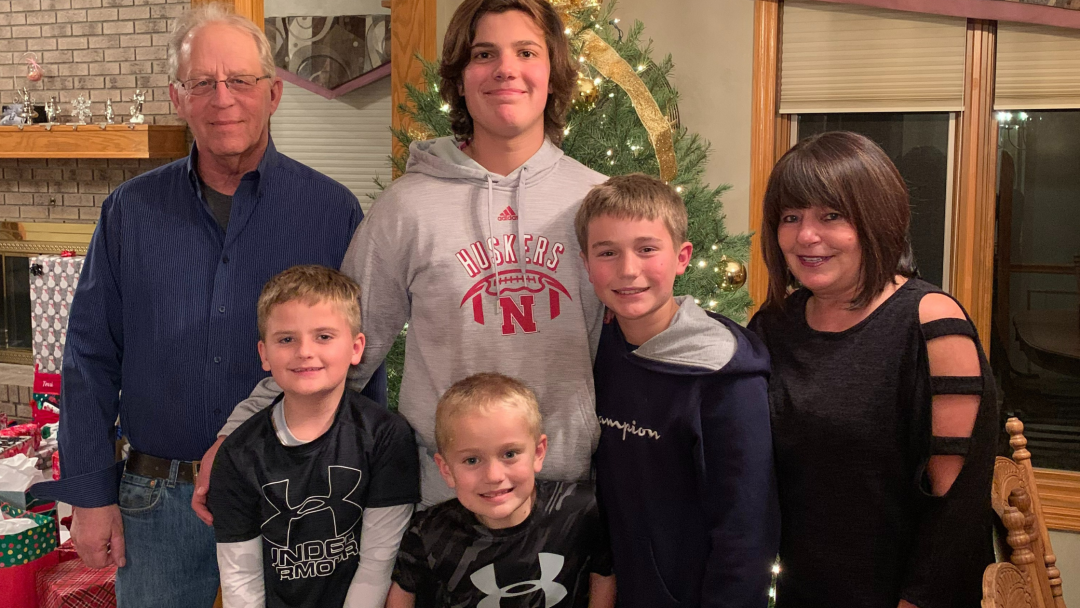 It’s clear that Terri has a zest for life and lives every moment to the fullest. Her belief that passion generates success and that love creates energy for your business can be felt and seen through every client she works with and how their lives are impacted by her dedication to her crafts.

“My story wasn’t planned but it was meant to be. When I was a young girl growing up, and if I heard them say this was going to be my life story, I would have laughed. But I couldn’t be happier…

I love every day of my life. I am excited to go to work every day and I know this life was meant for me.”

Terri knows there is strength in communities like Louisville.